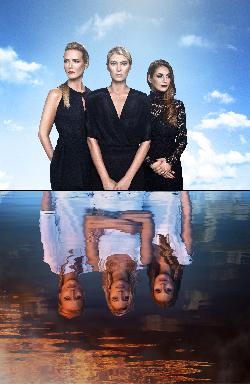 Three couples in their 30s enjoy a traditional trip to a cottage by the lake. Suddenly, it all becomes mayhem. Rebeka, Johanne and Kira have grown tired of their husbands’ abuse and make a life-changing decision ― to kill them! An explosion will teach them that freedom has its price. Eurochannel invites you to meet the darkest women in Scandinavia in a new TV series: Black Widows.

Mixing the best of Nordic crime drama with crackling dialogue and dark, wicked humor, Black Widows follows three women with exceptionally bad common things in common, their husbands. They are violent;they are criminal; and they are a threat to their families’ safety.The women plot to get rid of their husbands and when the deed is done . . . it is time for the women to start anew. But things are never that straightforward.

Divided in eight episodes, the first season of Black Widows further develops the Nordic thriller concept with a cross-national story. After the dangerous and seductive trio murder their husbands, what they thought would gain their freedom back turns into a cross-border policeinvestigation.

Black Widows stars some of the most famous talents of Scandinavia, with A-list names such as Peter Stormare, Cecilia Forss, BeateBille, andSynnøveMacody. With this cast, and a thrilling story that takes the notion of ‘Nordic Noir’to a new level, the series became a massive TV success in Sweden, Norway and Denmark following its premiere.

Welcome to Scandinavia to plunge into the aftermath of a fatal plot. Will these sinister widows get away with their plans? Are their husbands truly dead? Come find the answers in every episode of Eurochannel’s new series: Black Widows.